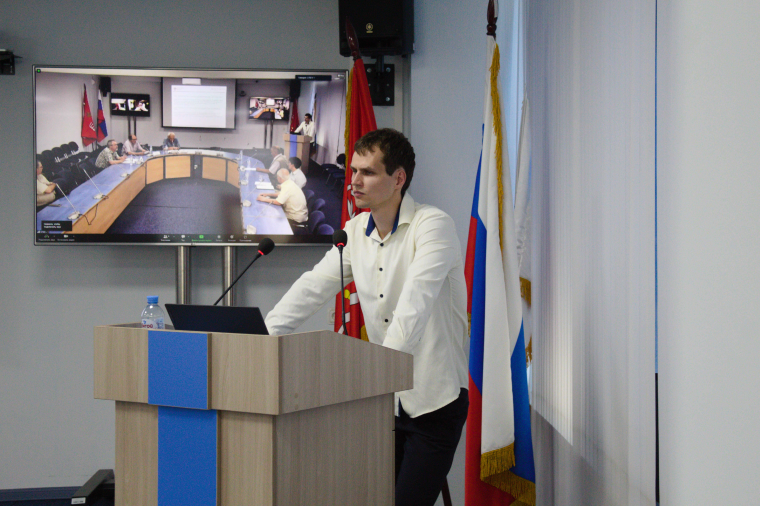 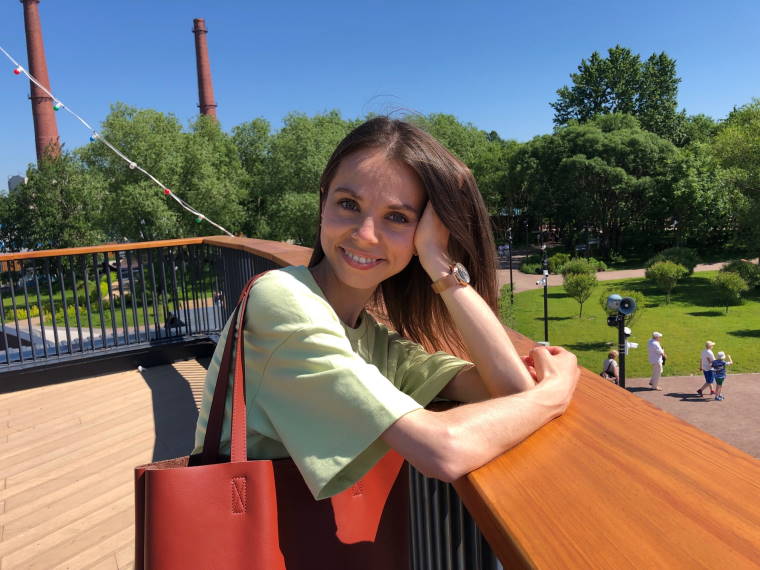 Valentina M. Litvyak won the award named after I. Ya. Gerlovin 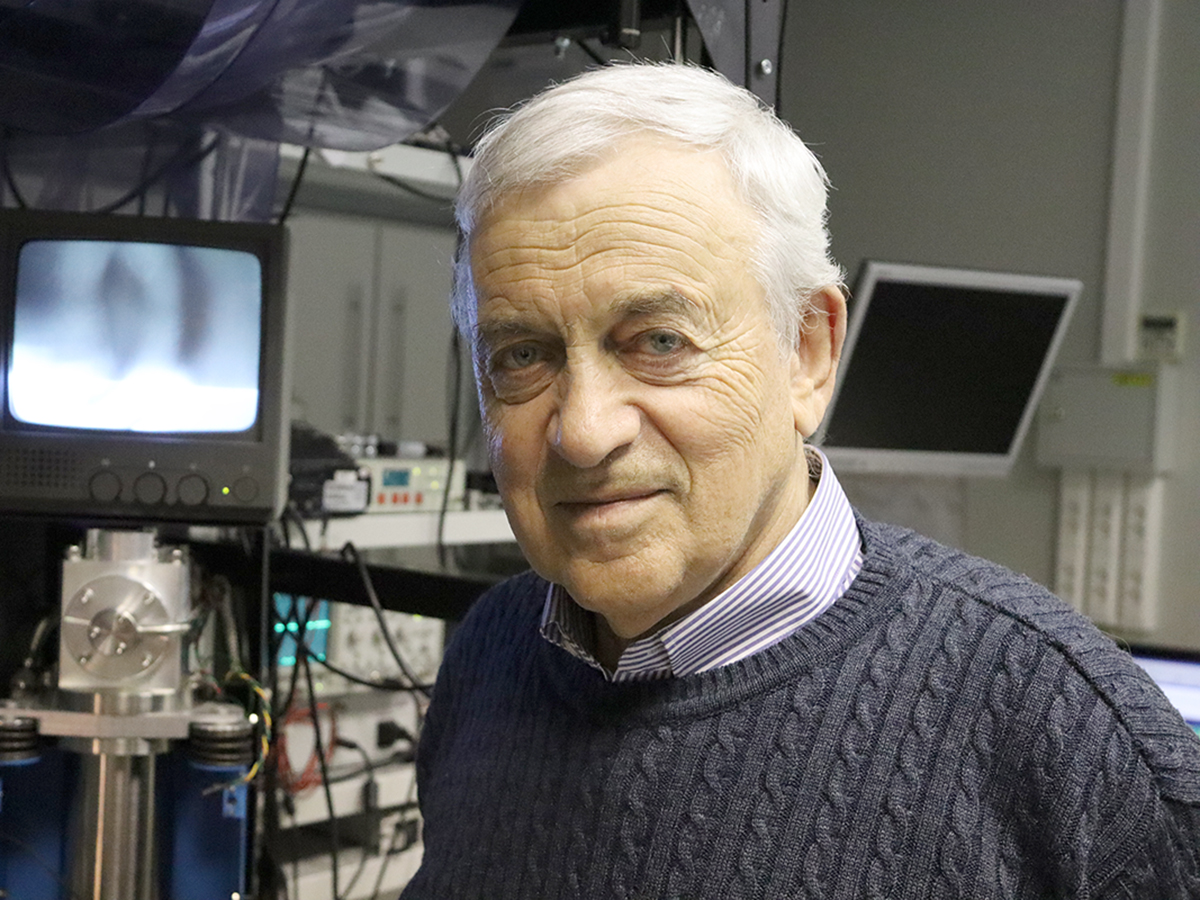 Valery S. Zapassky , a leading researcher of our laboratory, was awarded the State Prize in the field of science and technology for the creation and development of a new branch of physics - spin noise spectroscopy (together with Evgeniy. B. Aleksandrov, an academician of the Russian Academy of Sciences).

Now this area is being rapidly developed not only by our employees, but also by the international scientific community. Spin noise spectroscopy is a new method of physical research that makes it possible to observe the movement of elementary magnets in a medium (atoms, electrons, atomic nuclei, etc.). An important feature of this method is that it does not imply observation of the response of the medium to an external influence, as is usually the case: in order to determine the elasticity of the medium, one must try to deform it, and in order to find out the tone of the sound of the string, its vibrations must be excited. In this analogy, spin noise spectroscopy implies the ability to hear the sound of a string at rest.

Valery S. Zapasskii is one of the potential supervisors of undergraduates and postgraduate students. You can see the proposed work topics on our website (https://solab.spbu.ru/ru/)!

On site kremlin.ru: http://kremlin.ru/events/president/news/65771
And also in the news on the first channel (only the list of laureates): https://www.1tv.ru/news/2021-06-09/407879-razrabotchiki_vaktsiny_sputnik_v_v_chisle_laureatov_gosudarstvennoy_premii_rossii_za_2020_god

Vadim Kozlov, a master student of the Department of Photonics and an employee of the Spin Optics Laboratory, won a scholarship from the St. Petersburg State University Alumni Association (alumni.spbu.ru) 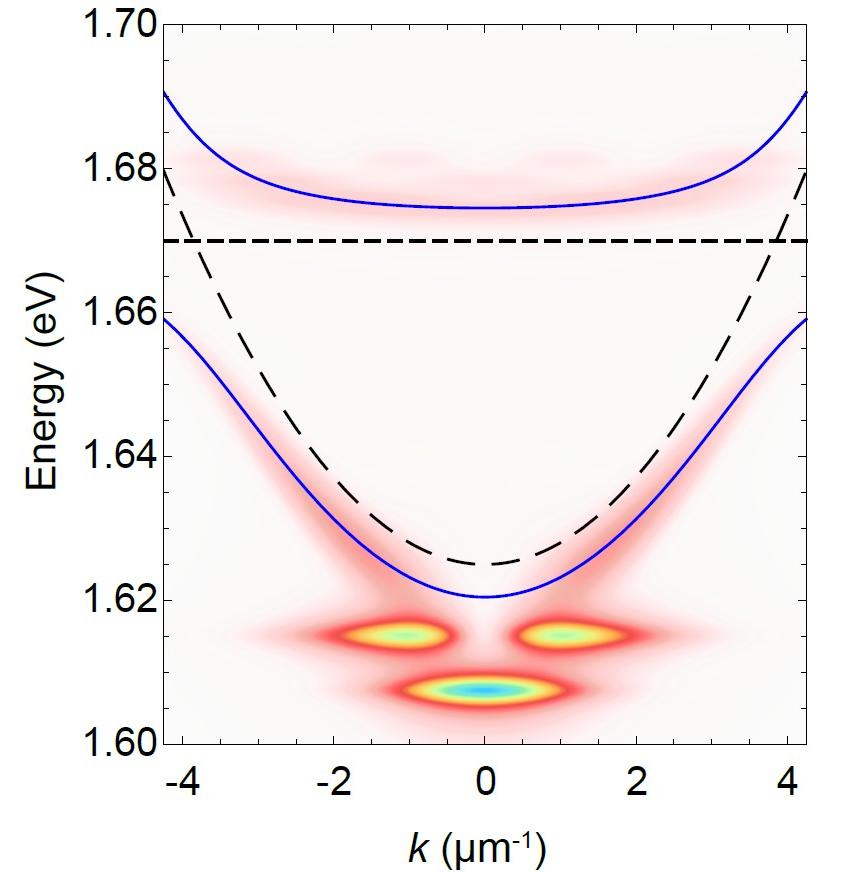 Another step towards a quantum computer: physicists have shown for the first time the condensation of "liquid light" in a semiconductor only one atom thick (spbu.ru) 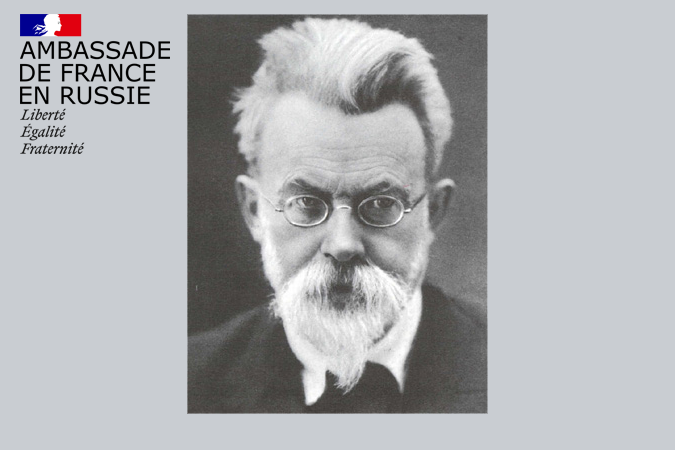 Master student of the Laboratory of Spin Optics Boris F. Gribakin won a scholarship to them. V.I. Vernadsky for a double postgraduate study: with us and at the University of Montpellier, France 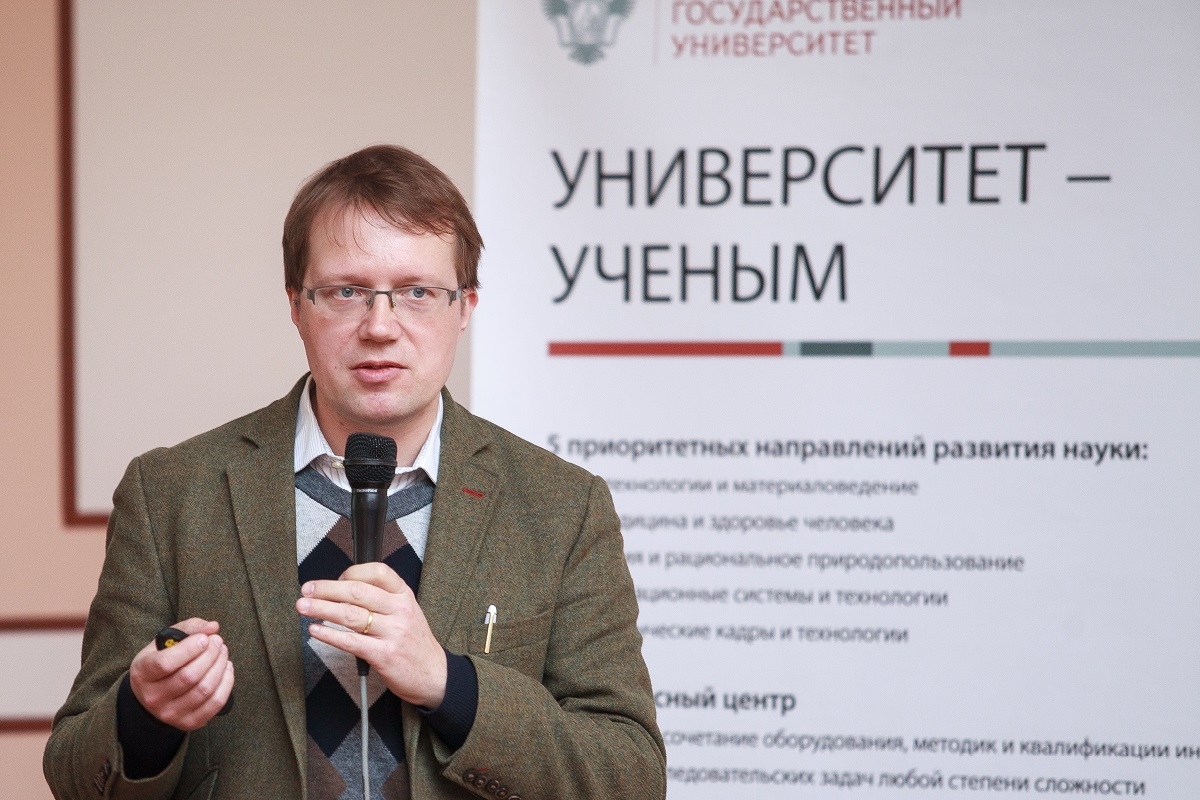 In 2020, the Spin Optics Laboratory, as part of several laboratories, became the winner of the Russian-German competition: "Russia and Germany: Scientific and Educational Bridges" with the TRR160 project: Coherent control of interacting spin excitations in semiconductor heterostructures 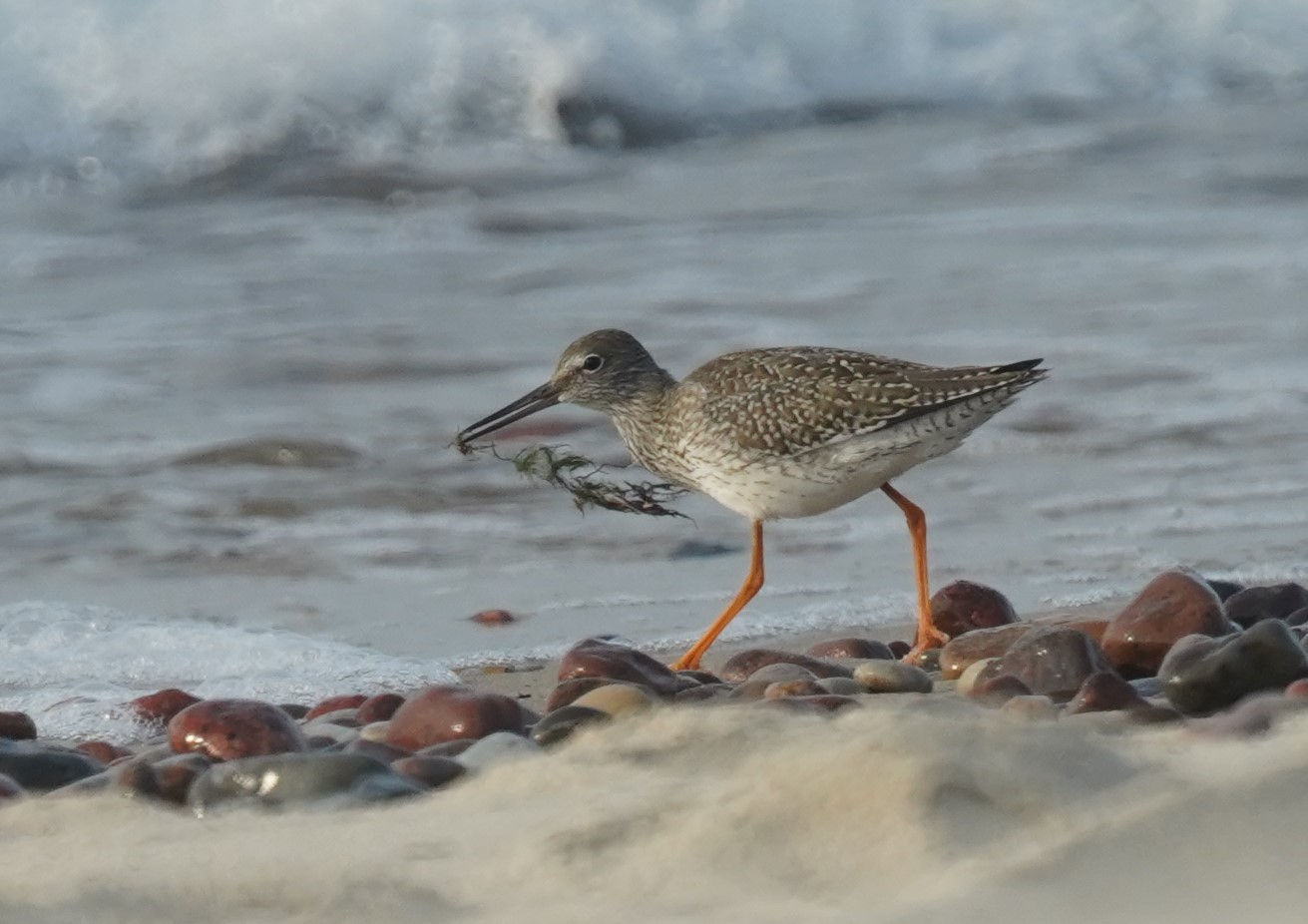 Leading researcher of the Laboratory Kirill Kavokin together with the staff of the Institute of Evolutionary Physiology and Biochemistry named after I.M. Sechenov are studying the magnetic orientation of birds. Birds soar above the magnetic field (Vecherniy Sankt-Peterburg) (in Russian) 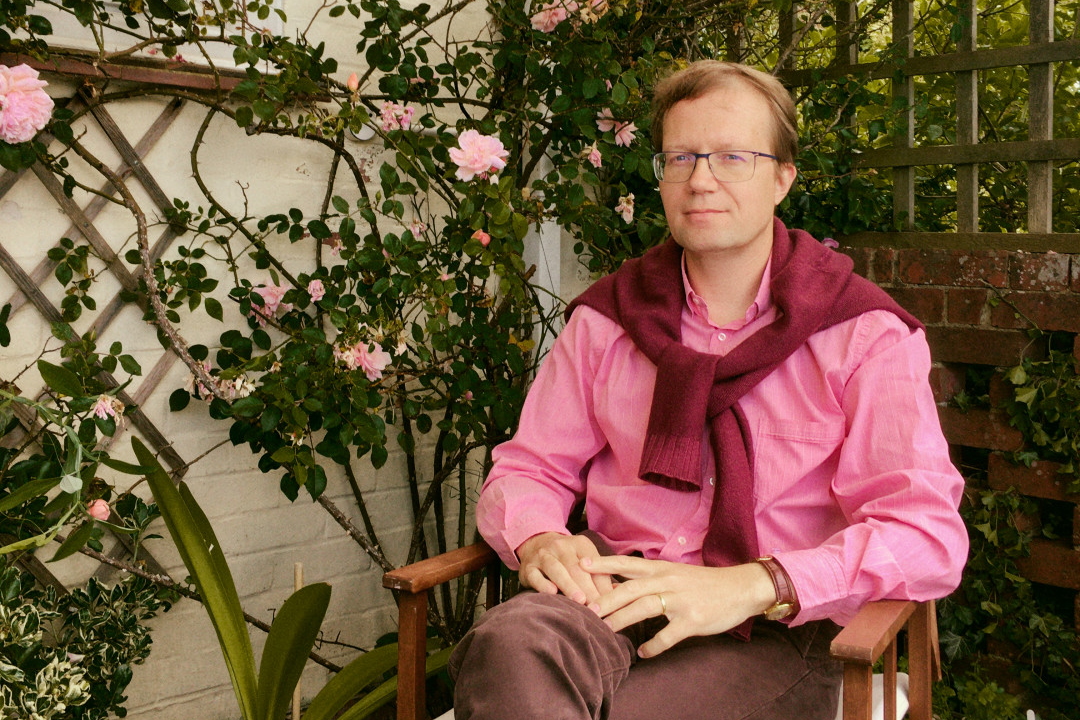 Head of the Laboratory Alexey Kavokin laureate of the "TOP 50 Most Famous People of St. Petersburg" 2020 (sobaka.ru) (in Russian) 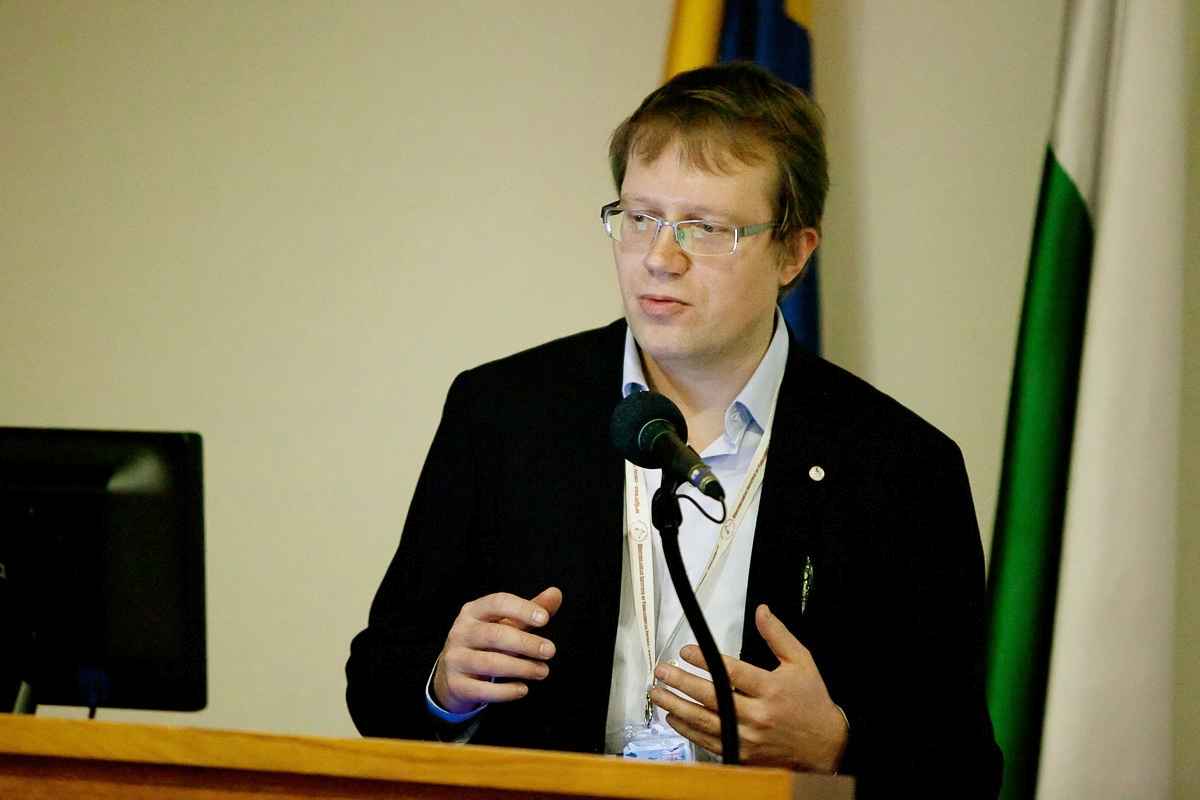 This award recognizes innovative contributions to sophisticated semiconductor and quantum nanostructure devices. The prize was awarded to A.V. Kavokin for predicting Bose-Einstein condensation of excitons and exciton polaritons at room temperature, which made it possible to create polariton lasers. 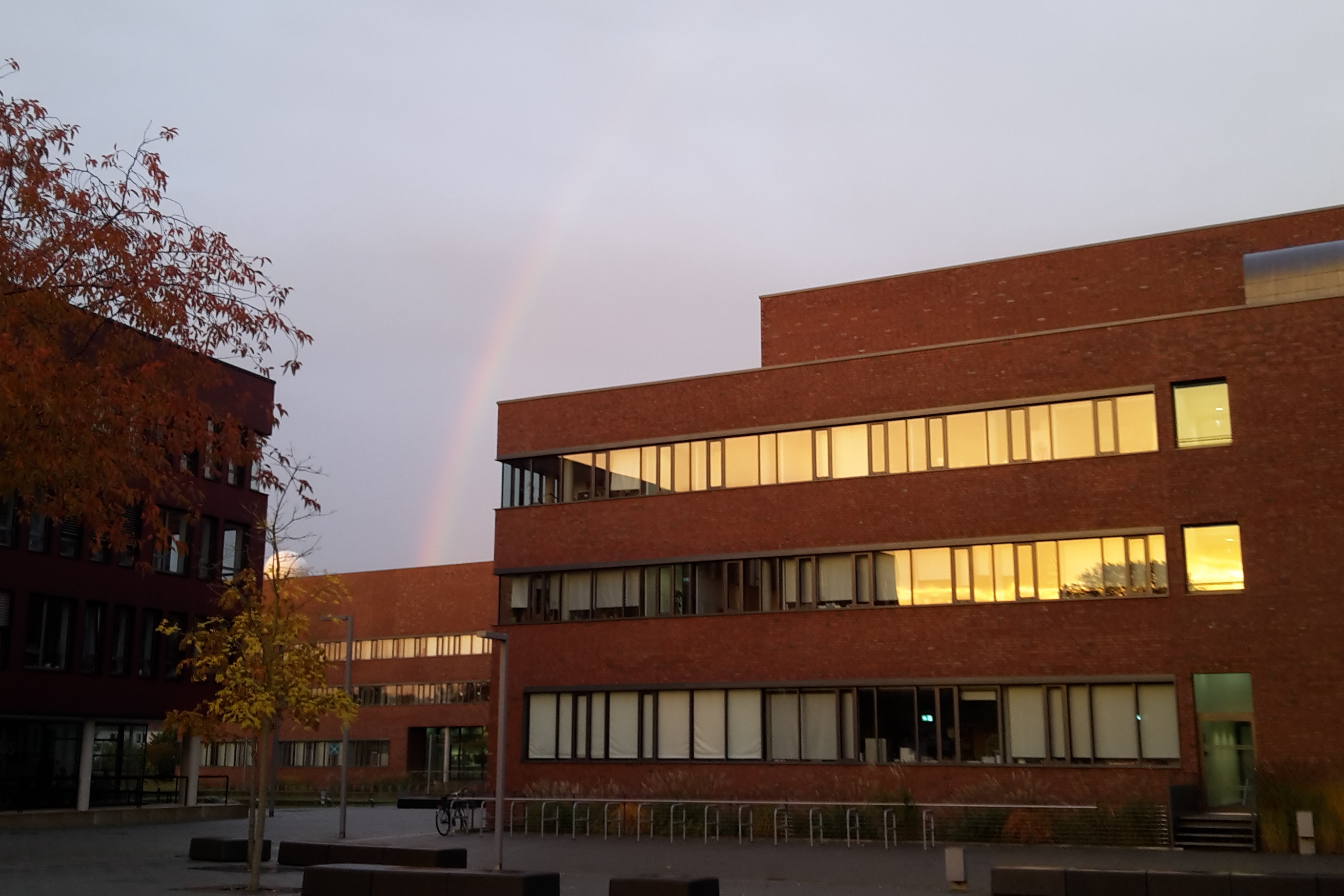 An employee of the Spin Optics Laboratory, a young candidate of physical and mathematical sciences, P.A. Belov, received a scholarship for a trip to the University of Rostock (Germany) Joint program of St. Petersburg State University and DAAD "Dmitry Mendeleev". 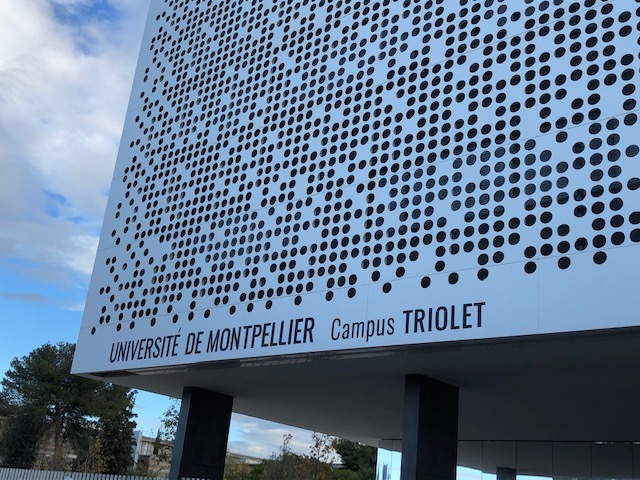 Postgraduate student of the Laboratory of Spin Optics V.M. Litvyak won an Ostrogradsky scholarship to travel to the University of Montpellier (France) to carry out for joint research. 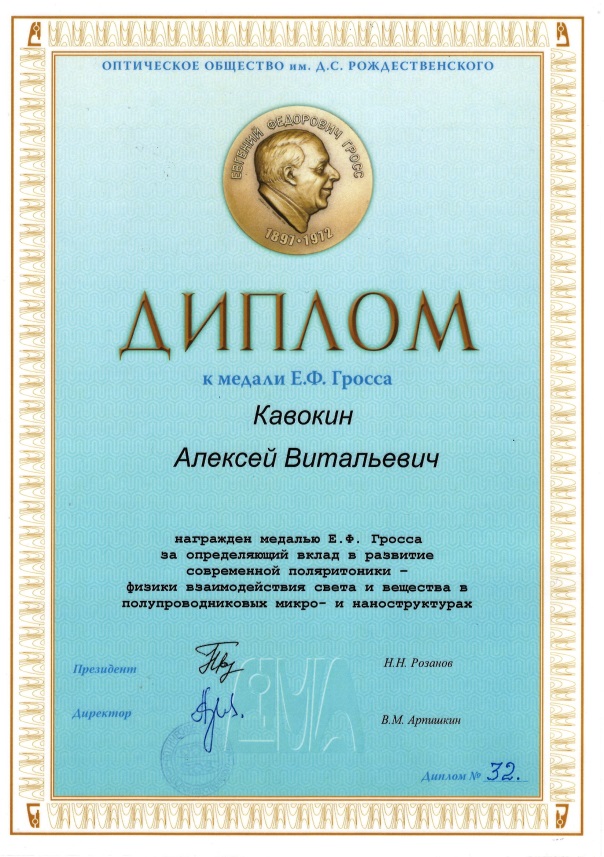 Head of the Laboratory Alexey V. Kavokin was awarded the Evgeny F. Gross medal for his defining contribution to the development of modern polaritonics-physics of the interaction of light and matter in semiconductor micro- and nanostructures. 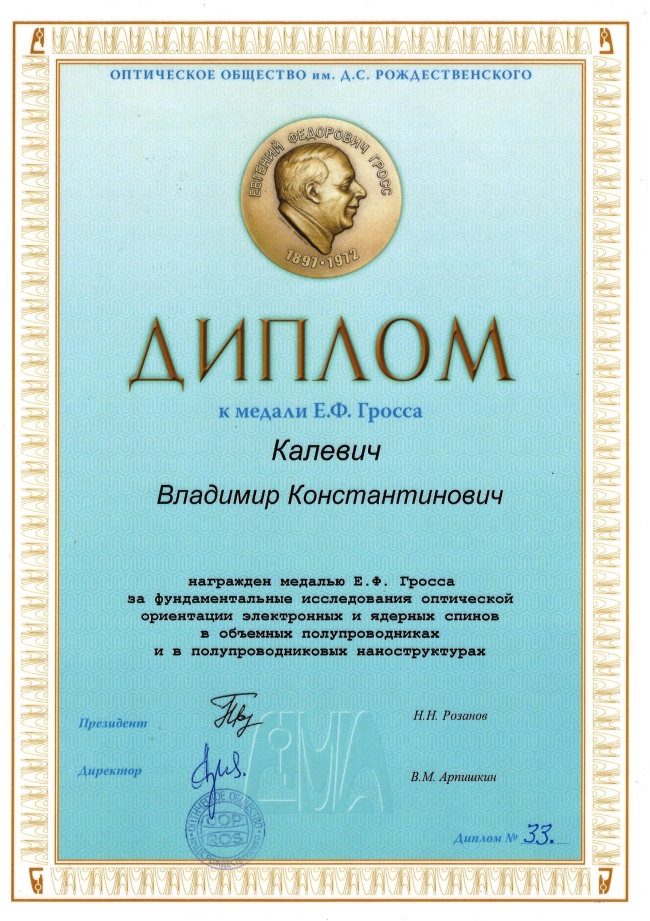 Vladimir K. Kalevich was awarded the Evgeny F. Gross medal for fundamental research on the optical orientation of electron and nuclear spins in bulk semiconductors and semiconductor nanostructures.

Yana Babenko, a postgraduate student of the Laboratory, was awarded a Diploma of the II degree for the report "Influence of nuclear spin fluctuations on the stimulated photon echo signal of an ensemble of localized carriers in InGaAs quantum dots" at the 22nd All-Russian Youth Conference PHYSICS OF SEMICONDUCTORS AND NANOSTRUCTURES 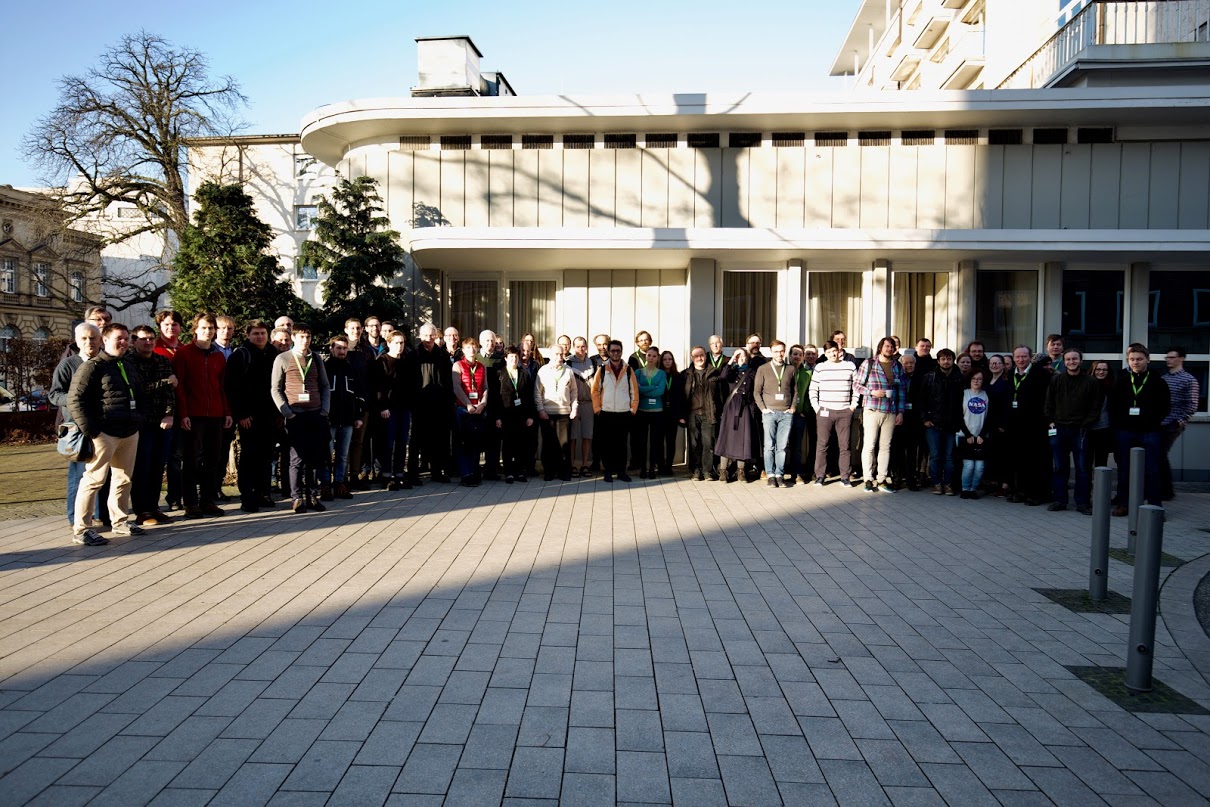 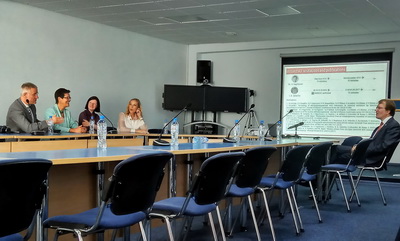 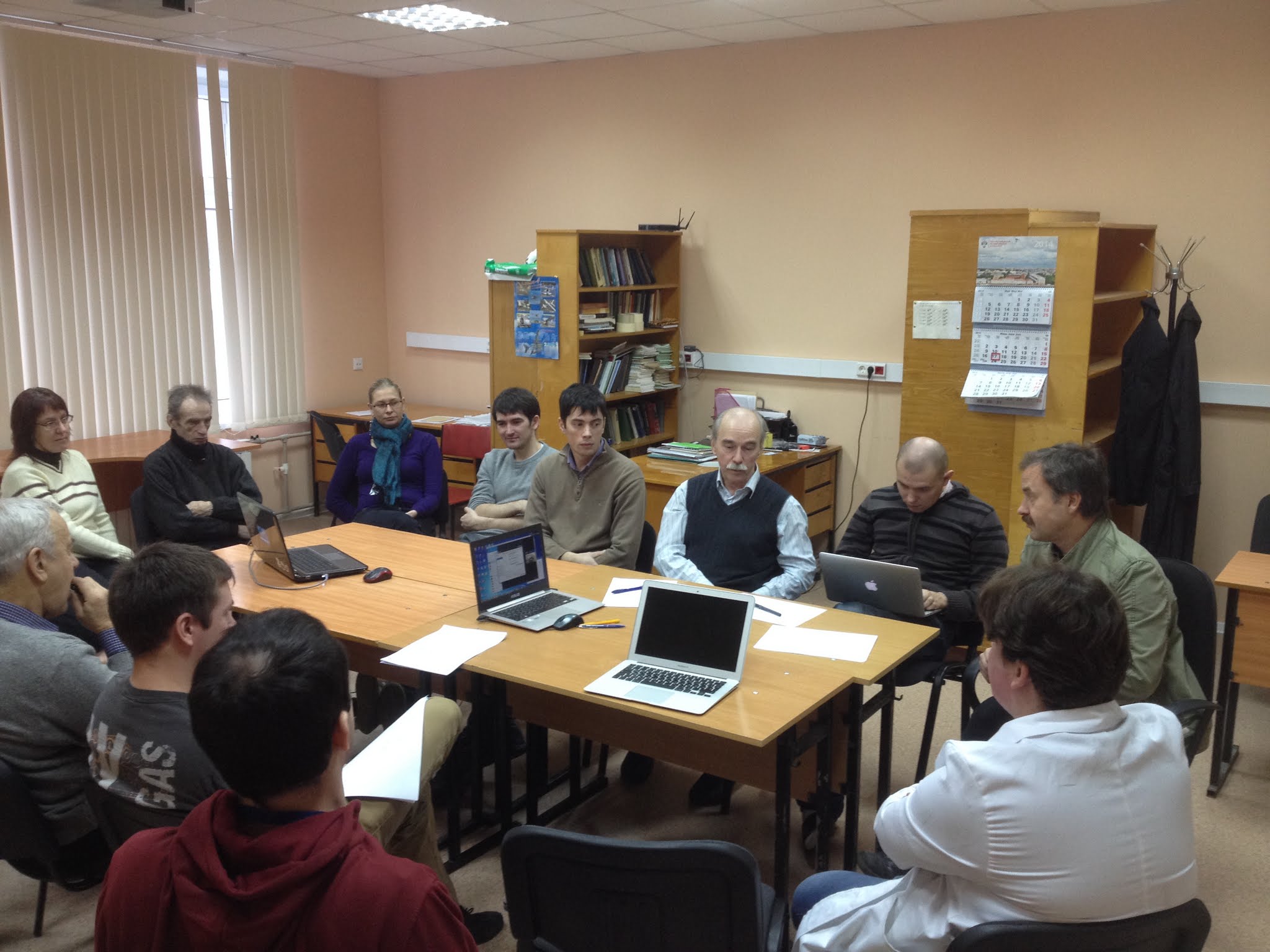 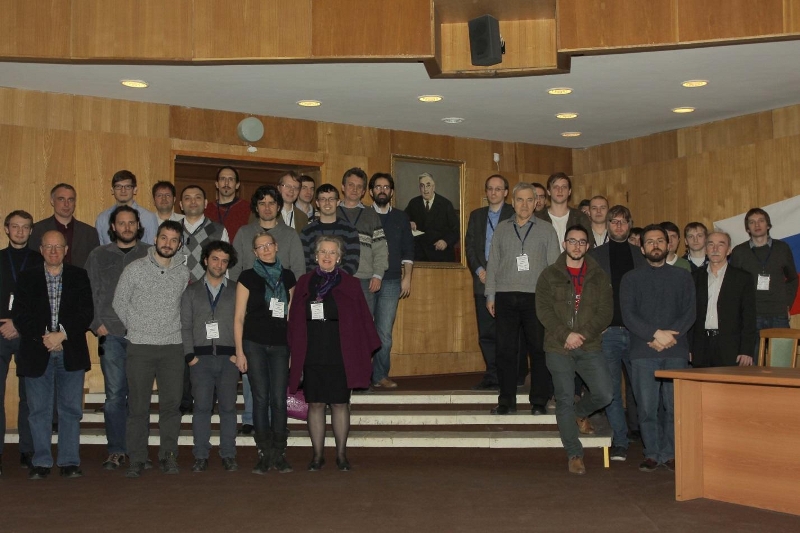 Seminar program
Visit to the Spin Optics Laboratory, SPbSU by the Members of Panel and experts of DFG (Germany) and Professors of TU Dortmund 26 October 2013 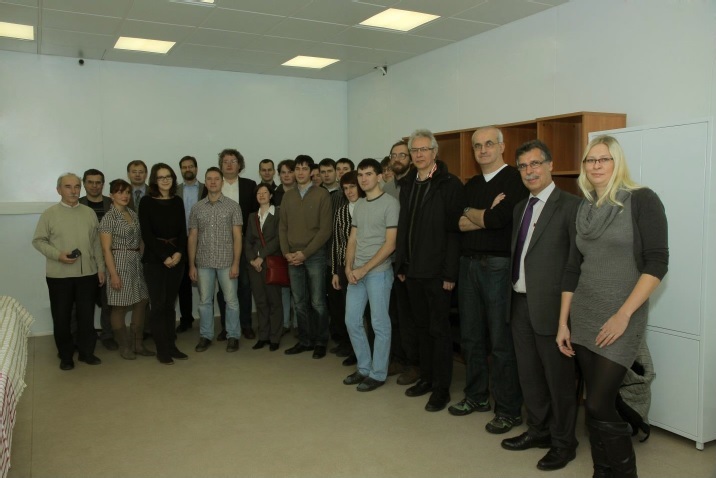 Report meeting of the Spin Optics laboratory 26 October 2013.
September 24, 2013 Spin Optics Laboratory visited by representatives of the Council for Grants of the Ministry of Education and Science of the Russian Federation. 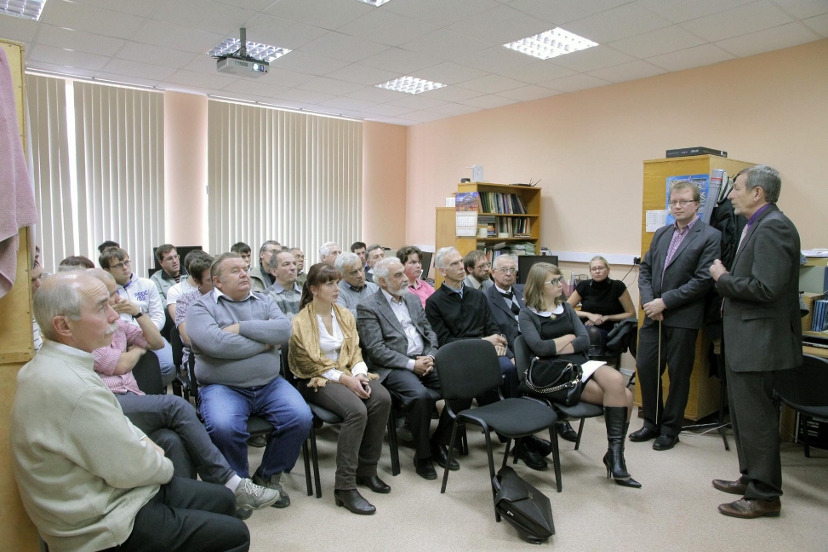 The head of the Laboratory Alexey V. Kavokin reported on the main results of the laboratory over the past first half of 2013. They are presented in «Кратком отчете о работе лаборатории Оптики спина им. И. Н. Уральцева в период январь – июль 2013 года» (in Russian).

A number of laboratory staff made ​​brief scientific reports.

Discussion of works on noise spectoscopy (M.M. Glazov) and on excitons in parabolic well (A. Trifonov) was also held. 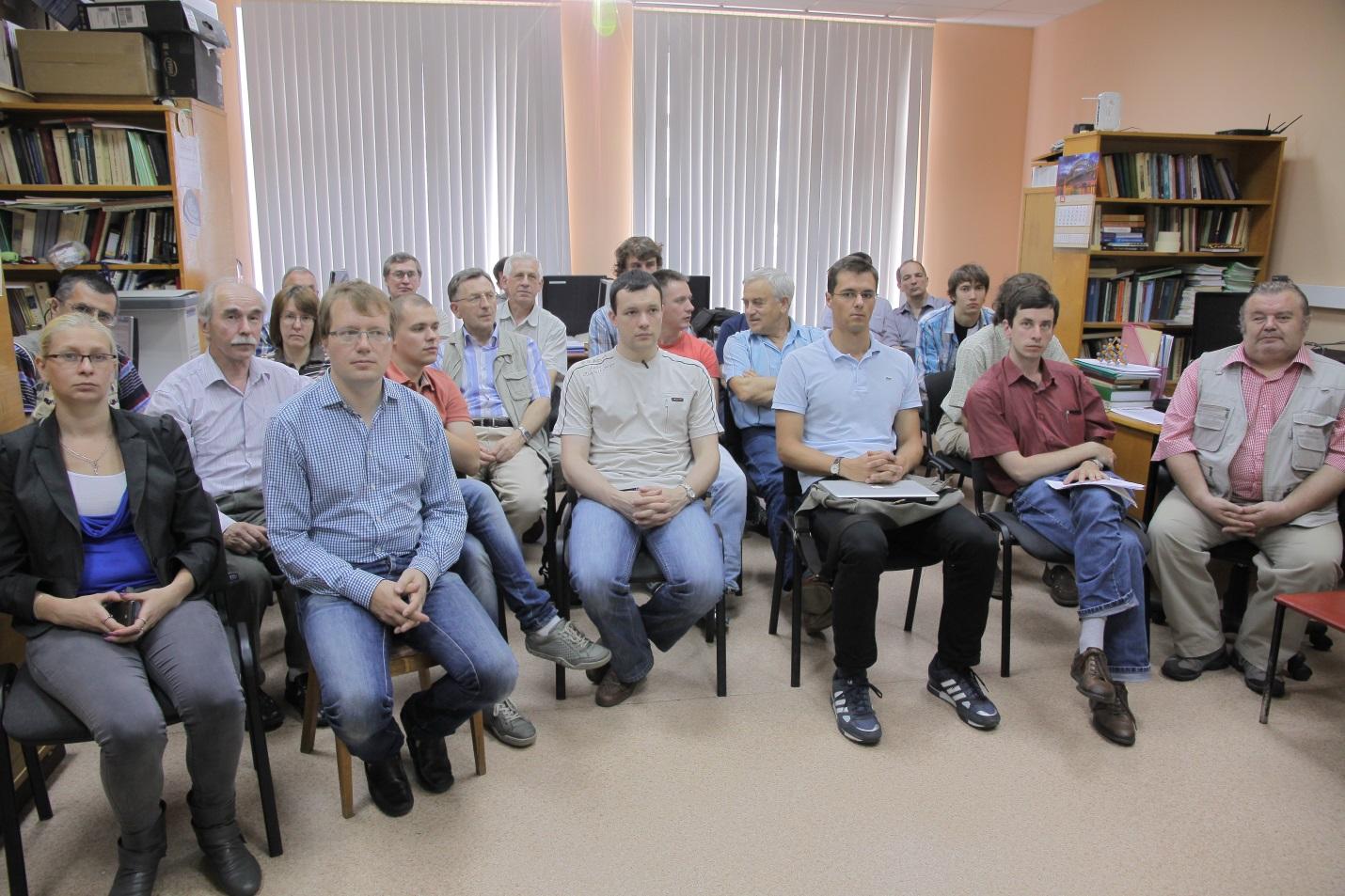 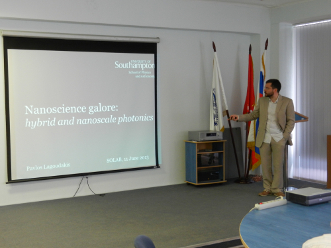 Prof. Bernard Gil has been elected a Honoris Causa Professor
of the Physics Faculty of Saint-Petersburg State University.

The ceremony of delivery of the Academic Mantel and Diploma of the Honorary professor will take place at the Blue Hall of the Physics Faculty of the University (1, Ulianovskaya str., Peterhof, Saint-Petersburg)

A short International Scientific meeting on Semiconductor Physics will precede the ceremony. The meeting will start on the 26th at 10.00 a.m. and will consist of 8 presentations with welcoming words by Alexey Kavokin. The list of the speakers at the meeting: